Submitted by Bernhardt Wealth Management on January 30th, 2012
Last year in the midst of federal debt crisis I observed in a client newsletter that as painful as the fractious debate over raising the nation’s debt ceiling was that I hoped it would underscore for Americans that getting our nation’s fiscal house in order should be job one. Yet although politicians on today’s primary campaign trails loudly address the need to reduce spending each year our federal government continues to spend far more than it collects in tax revenues.
For many in Congress I suspect the numbers on the federal balance sheet may be so big that they become meaningless. In my newsletter I suggested stripping away zeroes to try and make it possible to relate to the numbers and take action to reduce spending. MFS Funds has gone one better and produced a chart (If your budget resembled the U.S. Government) that really puts the federal budget in perspective. For example if you made $100000 last year and ran your household like the federal government you would have spent nearly $160000 and would be shouldering an accumulated dent of&nbspalmost $650000 more than six times your current annual earnings. Take a look: 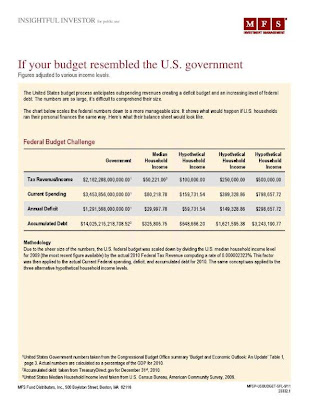 Thinking in terms of our own budgets illustrates the financial stress our nation operates under and underscores the need for spending and tax reform.

Don't hesitate to get in touch with us.
We would love the opportunity to become your trusted advisor.

Bernhardt Wealth Management, Inc. (BWM) is a registered investment advisor with the Securities & Exchange Commission. BWM may only transact business or render personalized investment advice in those states and international jurisdictions where we are registered/filed notice or otherwise excluded or exempted from registration requirements. The purpose of this web site is only for information distribution regarding BWM products and services as well as general investor education. All information is provided for informational purposes only and does not intend to make an offer or solicitation for the sale or purchase of any specific securities, investments, or investment strategies.